Norwegian Fjords for Travelers – The Stuff that Matters 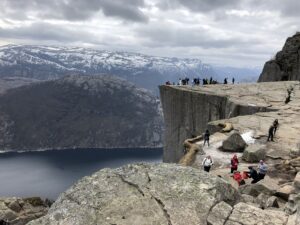 If someone were to ask me: “Marcelo, what are the top-three Scandinavian attractions that your clients want to experience?” my answer certainly would include the Norwegian fjords. Fjords in Norway are a must. The other two would be the Northern Lights and a tie among Viking sites, castles and natural scenery (I know… that’s more than three. Yes, I cheated.)

Instead of trying to answer how many fjords exist in Norway, or what the 17 prettiest ones are, or any such nonsensical questions typical of many blogs out there, I will focus on my experience. It’s what I always do when I write these pieces: I describe what I have personally experienced or what our clients share with us. I like to talk about what, I believe, matters to travelers. So, let’s dive into some Norwegian fjords. Pun. Intended.

A couple of years ago I was enjoying a cup of coffee and some waffles with a small group of people and one of the owners of the Kviknes Hotel, Mr. Sigurd Kvikne Jr., in Balestrand. It was a gorgeous morning and we were sitting at a large balcony facing the Sognefjord and majestic, tall mountains as the backdrop. If that sounds really cool… well, it’s because it was. Then, Sigurd said to us: “this fjord is as deep as the mountains surrounding it are tall!” That visual has stayed with me since, because it was so powerful.

That is, in essence, the definition of a fjord: a very narrow and deep body of water, generally surrounded by mountains.  The Sognefjord is affectionately called “King of the Fjords” because it happens to be both the longest and the deepest in all of Norway. It connects Bergen, on the coast, to a number of incredibly beautiful villages and towns inland. A popular segment of the Sognefjord is an arm which has its own name, the Nærøyfjord (a UNESCO World Heritage Site), appropriately named after the Norwegian word for “narrow.” The passage through the Nærøyfjord was popularized by the Norway in a Nutshell excursion and it is, most certainly, of jaw-dropping beauty. 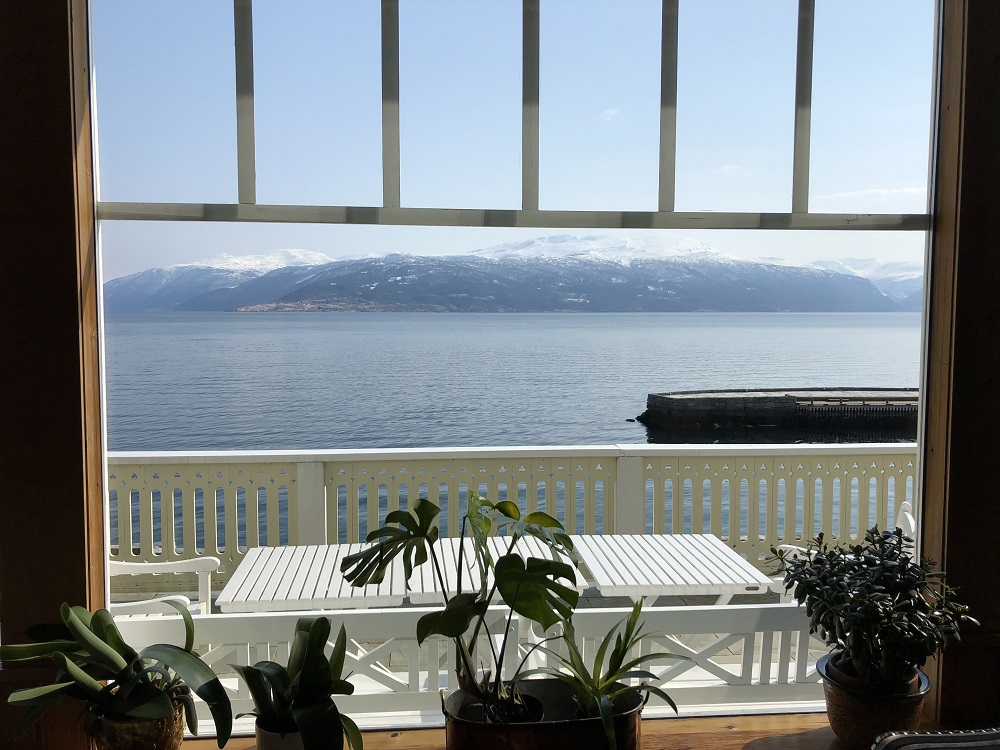 We recommend traveling from Oslo to Bergen in one of the “in a nutshell” tours (we use the Sognefjord in a Nutshell in this program) and spending a night or two at one of the little towns along the way, such as Balestrand. To enrich the experience, a RIB boat tour of the fjord is an experience which is equally scenic and thrilling (this applies to other fjords in Norway as well).

Attempting to emphasize how beautiful each fjord region is while remaining original becomes difficult quickly. Norway’s strongest appeal as a travel destination comes, after all, from that magical combination of water, rock and sky that can bring spontaneous, awe-stricken tears of joy to a grown man (I am not exaggerating).  That combination is everywhere around those fjords, the Hardangerfjord being no exception. Perhaps its most famous vantage point is from the Trolltunga, a troll-tongue-shaped rock (??) accessible to experienced hikers. Getting there takes some work (around 8 miles of complicated terrain), but the views are more than rewarding.

If the Trolltunga hike is too much for you, the region – easily accessible from Bergen – offers other adventures, including mountain climbing, via ferratas, kayaking on the fjord and even glacier hikes. The Vøringsfossen waterfall is another major highlight in the area and it is one of the stops on the Norwegian Scenic Routes called Hardangervidda.

How to Enjoy the Hardangerfjord

Yet another variation of the theme is the Hardangerfjord in a Nutshell tour, which takes you from Oslo to Bergen by train, ferry and bus while exposing you to key highlights. As for a place to stay, I recommend the very charming and historic Utne Hotel, in the town by the same name, or the grandiose Ullensvang Hotel, in Lofthus. Both hotels offer outstanding service in gorgeous settings.

Now we visit the south of Norway and get to know the Lysefjord, supposedly named after how beautifully the sunlight reflects off of its waters. Furthermore, the idea for the name came from the Vikings as they cruised the fjord… well, at least that is what I heard from the guide when I was over there, enjoying the fjord myself. Combining that story with the gentle boat ride on the fjord, the glass of red wine I was sipping and the imposing mountains surrounding us made for a very memorable afternoon. Perhaps that is why the Lysefjord is my favorite.

Adding to its notoriety is the presence of the Preikestolen (“Pulpit Rock”), possibly the most famous plateau and hike in all of Norway. You can see the structure from the fjord, but it does not compare to the experience of actually hiking to the top and absorbing the mesmerizing views from up there. Depending on when you visit, you will also witness young tourists playing a game of my-selfie-is-worth-more-than-my-life, but I decided to take a fully-developed-frontal-lobe more conservative approach and stood back from the edge while marveling at the fjord down below. Call me boring. The hike requires good mobility, but it is not extreme. You can get up there in just under two hours while moving at a reasonable pace. Other local attractions that tug at the experienced hiker/adventure’s heart are the hike to the Kjerag bolt, a large stone stuck in a crevice, and the 4,444 wooden steps of the world’s longest wooden staircase. Those will take you 2427 feet above sea level in under two hours! 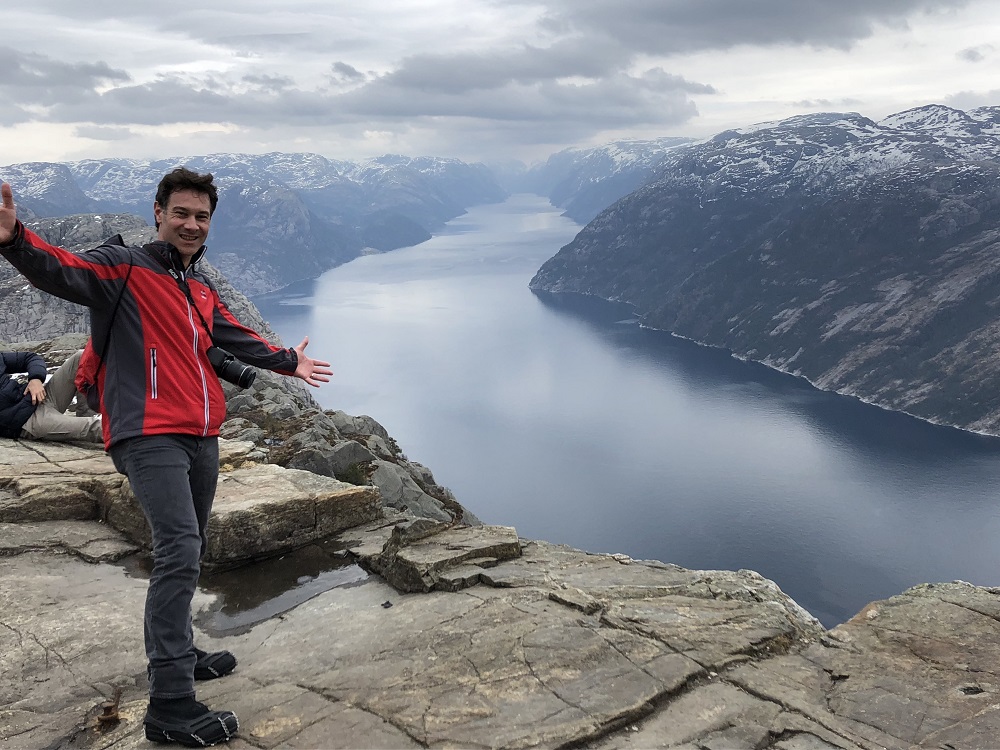 That’s as close as I could get to the edge of the Pulpit Rock. Lysefjord down below.

The Lysefjord is located in the Ryfylke region, in the south of the country. In the same region you will find the highly accessible Stavanger, a major city in Norway where you can arrive by car, plane, train or boat. The choice depends on your place of origin. Moreover, the city is full or charming cobblestone streets, colorful buildings, great restaurants and excellent hotels. The Thon Hotel Stavanger is one of my favorites. Near Sandnes, where the closest major airport is, you will find a historical gem of a hotel called Kronen Gaard. We like it so much that we included it in our Be a Norwegian for 10 Days (South Norway) tour. And for those interested, in this tour you will get to visit yet another set of UNESCO World Heritage Sites, the towns of Rjukan and Notodden.

A number of excellent Pulpit Rock tours and Lysefjord cruises are available from both Stavanger and Sandnes and we often include them in programs for our clients visiting the region.

You have seen pictures of it. You have heard about it. If you have done any sort of Internet search on “Norwegian Fjords,” most likely something about the Geirangerfjord has popped up. It is that famous (and a UNESCO World Heritage Site). For reasons I have already explained here, I can’t say I would call it “the most beautiful,” but it is certainly spectacular. On the way to the town of Geiranger your boat will pass countless waterfalls and, interestingly, a number of deserted farms high up in the mountains. Some of those farms have been converted into restaurants, which brings up one of my favorite aspects of the region: the food. I love Norwegian food, but there is something special, quite local, about the food prepared in the Geirangerfjord region. They even have a small chocolate factory in Geiranger! Near the midpoint of the fjord you will see the “Seven Sisters” waterfall, a major highlight. Your guide will certainly tell you the story behind the name, so I will not spoil the experience here. 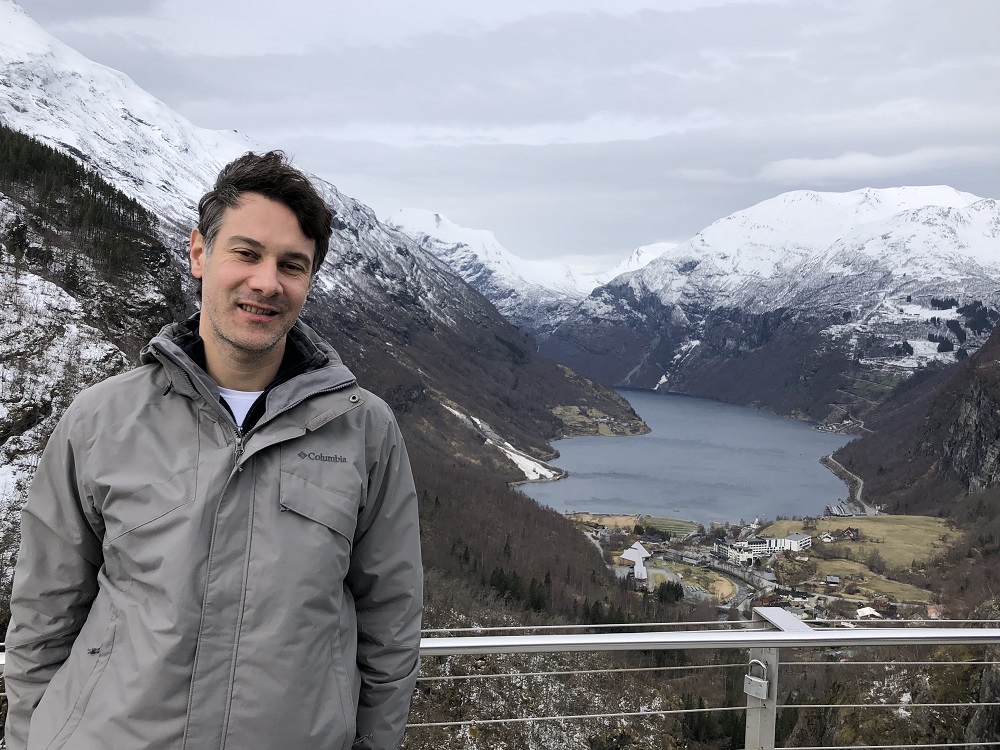 “End” of the Geirangerfjord behind me

My recommendation is to stay in Ålesund – possibly my favorite city in Norway – and embark on a day trip to Geiranger from there. We do this for many of our clients on the Scenic Norway: Railways & Fjords tour and they love the experience. If you do decide to spend a night in Geiranger, the traditional Hotel Union Geiranger is a great option for its accommodations, top-notch service and fjord views.

This place is so special to me that I chose it for the background in one of the central images in Discover Scandinavia Tous’ homepage (scroll down to “Meet Our Nordic Travel Guru” and you’ll find it there). The picture, unfortunately, does not do justice to how beautiful the area really is. And just like I mentioned food in the Geirangerfjord region, what draws me to the Nordfjord is the people. As a rule, I love Norwegians and think the world of them, but in my visits to Loen and other villages nearby, I sensed something particularly warm and inviting about those who welcomed me there. Really awesome. Speaking of Loen, there you will find a modern thrill called the Loen Skylift, which will take you from the fjord to the top of Mount Hoven (3317 feet) in about 5 minutes! It is a spectacular, tremendously scenic ride which cannot be missed. We made sure to include Loen in our Be a Norwegian for 10 Days (Central Norway) tour, where travelers will be treated to the skylift (and champagne at the restaurant atop Mt. Hoven) and also “troll car” ride on the nearby Briksdal Glacier. 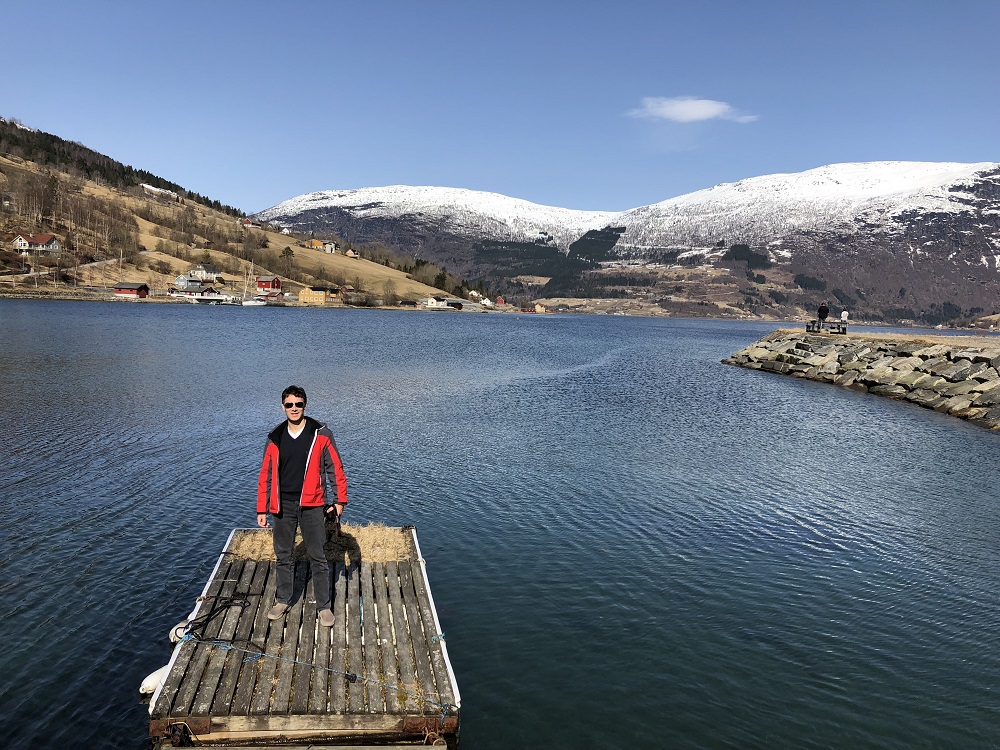 Beautiful spot by the Nordfjord

The fjord is named after the word “North,” so – not surprisingly – it is the northernmost fjord in this short list. There is a large list of bucolic villages where you can stay and distance yourself from large crowds, such as Kalvåg and Måløy and we can definitely get you there for a very relaxed getaway. Loen provides a very accessible option, where a stay at the Alexandra Hotel is my personal recommendation.

There you have it: a short list of fjords – and their surroundings – I have personally experienced. I feel excited about recommending them to all travelers. The list is incomplete, though: there are many other wonderful fjord experiences to be lived in Norway… but that is for another article in the not-so-distant future. Enjoy!

RSS feed for comments on this post. TrackBack URL

Our Destinations Across Scandinavia

Amazing Service
after the Sale

Based in the USA

Join Our List
Stay Informed About COVID & Travel in Scandinavia

Simply enter your information below to gain immediate access!