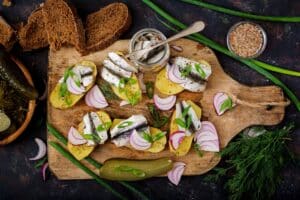 No one thought very much about Scandinavian dining until the arrival of New Nordic Cuisine and its flagbearer Noma – the three-Michelin star restaurant in Copenhagen voted best in the world several times since it opened a decade or so ago.

Tucked into the far north of Europe and almost entirely surrounded by seas, Scandinavian cuisine is heavily reliant on seafood, local crops which can be grown in the short summer season, and the foraging of wild fruits and nuts. This makes it unique and a must-try during any visit to the region. Relatively simple in form, it is known as farmers fare (husmanskost).

What can you expect from restaurant menus in Scandinavia? We’ve brought together a literal smorgasbord of foods, some well-known across the globe, others still very much limited to their homeland.

Smorgasbord translates to ‘sandwich table’, but is much more than a tray with a few sad-looking sandwiches placed on it.

Best compared to a Scandinavian version of tapas or meze, the smorgasbord is made up of various hot and cold dishes which are usually shared among several people, allowing each to choose their own flavor combinations.

In Denmark, look out instead for det kolde bord. Meaning ‘the cold table’, it is a very similar idea, but is served as an accompaniment to main dishes, such as those we celebrate below.

When it comes to fish, there’s really only two or three species you need to know about in Scandinavian cuisine.

The first is herring, an oily fish which is enjoyed fried, smoked and pickled. Fresh, cured and smoked salmon is also popular, and plays a leading role in dishes such as Finnish lohikeitto. This is a broth-like soup flavored with lots of dill and containing pieces of salmon, together with potatoes and leeks. Atlantic cod plays an important role in heartier dishes, as well as snacks such as Iceland’s harðfiskur, consisting of the dried fillets. It can also be made from haddock and catfish.

When it comes to other forms of seafood, crayfish and crab are both frequent additions to menus, particularly in the late summer. Crayfish is more common in Sweden and Finland, while crab is the usual choice in Norway.

More divisive dishes to be aware of include Iceland’s hákarl and Sweden’s surströmming. Not to be consumed by those without a strong stomach, hákarl is made from the fermented flesh of Greenland and sleeper sharks. Once it has been dried for several months, it is cut into chunks and provides a strong flavor to any dish it is added to.

The scent of surströmming is so strong that it is recommended the cans it comes in only be opened outside. It is said to have a very acidic taste which is rarely ever welcomed by non-Scandinavian tongues. You might instead prefer to stick with blåbärssoppa, made from bilberries (not the same as the blueberry). A rich purple color and sweet-savory flavor ensures this soup will leave smiles all around.

Thanks to a certain Swedish furniture company meatballs (köttbullar) are perhaps the best known of any individual Scandinavian dish. They are traditionally made with a combination of ground beef and pork, alongside spices including nutmeg and cardamom.

Served in a rich and creamy sauce heavy with dill, other accompaniments include mashed potatoes and lingonberry or cranberry jellies.

Lamb and mutton dishes are also easy to come by. For instance, Norway’s national dish is fårikål, a warming stew made by slow cooking mutton with cabbage and black peppercorns. Icelanders prefer to use smoked lamb, served in a white sauce in hangikjot, a dish intricately associated with Christmas for many in the country.

Beef dishes include a stew called kalops from Sweden, which has a very distinctly Scandinavian flavor because of its use of allspice berries. You’ll almost always find it served with potatoes and red pickled beets.

Reindeer meat is another addition to menus, and can be used to form meatballs, stews or even as a topping on pizza. It has a similar profile to venison.

Scandinavians are some of the biggest coffee drinkers in the world. A mug of their dark brew – usually served without cream – is best enjoyed from the comfort of a café table with one of Scandinavia’s sumptuous cakes or pastries.

The most common is probably the skillingsboller, or the cinnamon roll. They are also called korvapuusti in Finland, kanelsnegle in Denmark and kanelbullar in Sweden. Made from an enriched dough, they are flavored with cardamom as well as cinnamon and are extremely difficult to resist.

If you’re looking for a Danish pastry in Denmark, you’ll need to ask for wienerbrod (Vienna bread), the name the pastry has in the country.

The Flavors of Scandinavia

The good news is that you don’t have to fork out for a tasting menu at Noma to experience all that Scandinavian cuisine has to offer. While relatively simple compared to other culinary traditions in Europe, it is no less tasty, as you’ll discover for yourself on a trip to this astonishing part of the world. I know you are salivating right about now… aren’t you?